Since everyone's on holidays at the moment, we got together for an extended Rippers session. It ended up going for eight hours, with about a one hour break for dinner; the Actual Play is fairly long because it's effectively two sessions' worth of stuff, and we spent a good deal of time discussing and executing plans and conducting investigations so big combat scenes didn't really feature this time around.
Last time, Pratchett and Baker were unable to prevent the theft of a canopic jar from an exhibit at the British Museum. Baker was certain that it contained the heart of a rare Mesopotamian mummy.


Baker and Pratchett debrief their superiors at Ripper HQ, and also reunite with Douglas. They return to the scene of the crime and try to track the thief, but find only a small black cat statue. Baker uses his shady contacts to learn it's the calling card of the cat burglar known as Black Cat.

On Douglas' suggestion, they set up a "job" for Black Cat to steal an Egyptian cat statue from the Rippers Lodge. It's early morning, so they have to wait until that night to spring the trap and question him about the whereabouts of the stolen canopic jar.

On his way home to sleep, Pratchett is set upon by two assassins with swords who scream "Die in the name of Imhotep!" Surprised, overwhelmed, and badly injured, Pratchett makes it inside his office and bolts the door; the assassins are forced to flee as people begin to emerge onto the street. Pratchett returns to Rippers HQ by hansom cab to seek medical attention, and everyone sleeps at the Lodge until evening.

Late that night the Rippers lure Black Cat into a secure room and capture the burglar after a brief skirmish. Unmasked, they discover that Black Cat is a woman! Upon questioning her, they learn that the stolen canopic jar has been delivered to Lord Julian Maybrick, an occasional Rippers sponsor, friend of Johann Van Helsing, and collector of Egyptian artefacts (and the man whose party the PCs crashed in the Prologue). Black Cat only agreed to tell them this because they promised not to reveal their source, and Pratchett agreed to pay the rest of her fee for the fake job and let her go.

Led by Van Helsing, the group calls upon Maybrick's town house only to discover he has departed for his country estate earlier that evening.

Having missed the last train, Pratchett, Baker and Douglas travel to Maybrick's estate via carriage, arriving in the morning. Pratchett and Baker meet Maybrick and suggest he may be in possession of the jar, perhaps to protect it. He takes umbrage and orders them to leave. Meanwhile Douglas strolls in the back of the house, but doesn't find anything before being accosted by servants and escorted off the property.

Douglas jumps the wall and the group meets up again. The groundskeeper releases his dogs, and the Rippers climb a tree. Pratchett reveals his ability to empathise and communicate with dogs, and persuades them to leave - although the group remains in the tree to avoid the groundskeeper.

Some time in the afternoon, they see a carriage arrive with several lackeys and one gentleman in a top hat. The new arrivals are met at the front door by Maybrick and his butler, and are escorted inside. One of the lackeys drives the carriage around to the back of the house.

They climb down and circle around the mansion, but run into some of the dogs and the groundsman. They try to persuade him they are supposed to be there, but he tries to escort them to the main house "for their own safety." Douglas shoots him in the back, and is badly mauled by the dogs until Pratchett manages to call them off again.

They drag the unconscious groundsman towards the carriage. Pratchett recognises the lackey guarding it as one of the assassins from yesterday morning. He steps out and stabs the man before the thug can draw his weapon. They try to stuff the body into the carriage's trunk, but discover it's already occupied by two active Mummies. They slay one, and set fire to the carriage which burns the second one. As the fire takes off, they retreat into the cover of the garden.


To prepare for this session, I spent maybe an hour or two writing notes and mulling over the existing situation. With several elements already in play, I drew a relationship map showing who was doing what with whom. I then came up with a couple of timelines - lists of sequential events that would happen if the NPCs' plans went ahead unopposed. Once the PCs start to interfere, I just need to adjust the plans and maybe rework the timelines to reflect the changed circumstances.

All of my prep for this seven hour session (and probably for the next session as well) fit on one piece of paper, although I also used another sheet with some NPC and monster stats. Here's a scan, although I've obscured the details since I don't want to reveal some of the connections to my players yet! 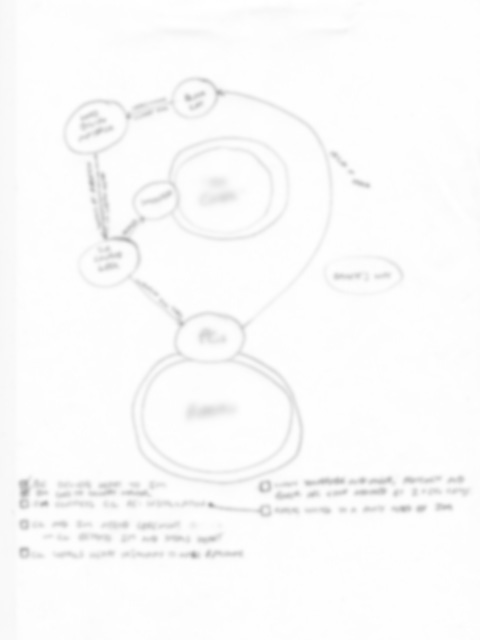 Relationship diagrams help me get a better feel for how things look from various points of view. A lot of this planning style is influenced by Apocalypse World which uses Fronts (sources of trouble) and Countdown Clocks (essentially, a list of what will happen if nobody interferes). Speaking of which, I have a three-player Apocalypse World game lined up later in the week with two of my three Rippers and one of the Pathfinder guys.