The Voice of the Blade

One of the intriguing things about Blade Bind is the way that the Blades influence play. They are sentient entities with their own personalities and goals, yet nobody actually plays a Blade. Their personas are not given voice, yet they are impossible to ignore.


At the surface-level, the Blades influence play with their appearance. They are strange, menacing, often partially organic, and kind of creepy. Some of the strongly-themed Blades provide hints as to their origins and personalities, such as the archangel feather Michael or the Japanese demon Oni — although the entities themselves are likely to be simply co-opting mythical symbology to influence their wielders. The Blade designs act as a visual cue that the players can riff off and use to expand their own backstory and personality. The players might also decide that their Blades communicate telepathically, or even that they can speak, but that's down to freeform roleplaying.

The Techniques unique to each Blade also influence the way the Chosen fight, opening up different approaches and playstyles.


Blades deeply influence the core of the system through the Power they provide to their wielders. The Blades want you to have more Power than you can control, because then they can take you over and pursue their true objective. To that end, they tempt you to increase your Power each time you fight. It's your choice... but it's so tempting, and if you don't take the opportunity you may find yourself quickly outmatched. And if you lose too many fights, you'll find your Will eroded, and the Blade will start to use your moments of weakness to involuntarily feed you more Power. Once you gain Power, you can't decrease it — so every point ramps up the pressure to keep your Will high.

It's when a Chosen finally overreaches and becomes Bladebound that the voice of the Blade is most clearly heard. The character loses their free will, and must follow a prioritised list of actions. The Blade ultimately wants its Enmity (one of the other Blades, against which it holds an age-old hatred) to become Bladebound so the two can duel in their true forms, and one will destroy the other permanently. To that end, it'll destroy everything its own Chosen and its Enmity's Chosen hold dear. 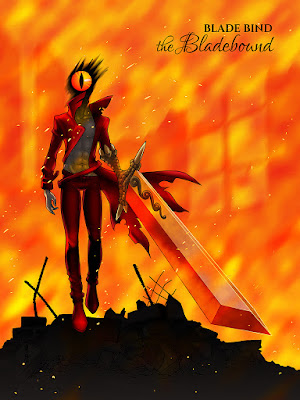 It's possible to thwart the Blades and avoid their tragic race towards death and destruction. Defeating a Bladebound causes its Power to drop, and you can give the Chosen new purpose that may allow them to snap out of it and regain control. And there are a couple of unlikely (though possible) situations that can end the game without anyone having to die.

Rather than being portrayed by a player at the table, the voice of the Blade is forged into the very structure of the game.

The Blade Bind Kickstarter is on now, and runs until 27 October 2016! It's a bit of an unusual campaign, so I thought I'd talk a bit about how it's set up and what I hope to achieve. You can check the Blade Bind tag for other blog articles discussing the game's development. 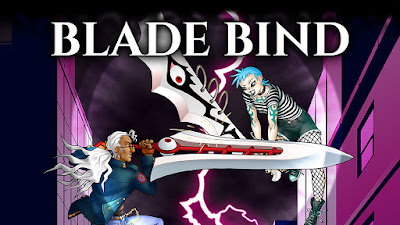 
I'm using DriveThruRPG to fulfil both digital and print rewards, and I've decided to go with at-cost physical Rewards. This does mean that Backers pay part up-front and will pay DTRPG separately for the printing and shipping after the campaign's finished. However, this approach has the advantage that I don't need to inflate prices to cover potential price-hikes, which means that each Backer will pay the best possible price. I'm also able to offer Rewards at less than the planned RRP, so you really will be getting a good deal. This also explains why the project has such a low funding goal.

If you aren't keen to pay before-and-after costs, you can always pick up the PDF-only option for less than the RRP.


Apart from a few illustrations (that I'm doing myself) and final details, the book is all but complete. It's written, playtested, and laid out; I just need to add the finishing touches and export the PDFs. Even if the Kickstarter doesn't fund, I'll still be releasing it on DTRPG in the next few months.

I have a couple of other items planned — a printer-friendly PDF rulebook, and a deck of custom cards. The cards will be available to everyone at the PDF level and higher as a print-and-play PDF, and I'm also offering them as a quality POD card product. The cards include a standard card deck with built-in setup prompts, and thirteen cards that provide Blade summaries for easy reference.

So since I don't need the Kickstarter to fund actual production costs, why am I running one?


Firstly, I think a Kickstarter is a good way to get people talking about the game, and to provide a focus for interest and discussion. It raises visibility in a way that releasing it directly on DTRPG doesn't.


Secondly, and more importantly, I want to use the Kickstarter to crowdsource feedback. While I'm pretty happy with the game, there may be unclear explanations or missing details that I simply can't see because I'm too close to the material. By getting more people reading and hopefully playing the game, I am hoping to catch any final rough spots and polish the game smooth before it's released publicly.

I'm going to be sending the current ashcan draft to backers at the end of the Kickstarter, and declaring a one-month review period. Once I've taken any feedback into account and made the game as good as it can be, I'll upload the final PDF and set up the print version.

If I just released the game off my own bat, there's a chance that I might then find a mistake or decide to revise a rule. Updating the digital version is easy, but updating a POD file means it's unavailable to the public while I wait for a new proof, which can take 3 to 7 weeks to arrive here in Australia. I'd rather avoid that inconvenience if I can.


Backers will get access to the game before the public release; they'll have the opportunity to help me improve the game and make it as good as it can be; and, by joining the Kickstarter, you'll be paying less than the final RRP.

So yes, it's a bit of an unconventional campaign, and even if you don't decide to back it I hope you'll give it a look once it's released to the public!