The PowerFrame RPG Core Rulebook is now up for sale on DriveThruRPG!

It's been a long journey, but I finally made it! Today I'm going to talk about the system's history, and look towards the future. 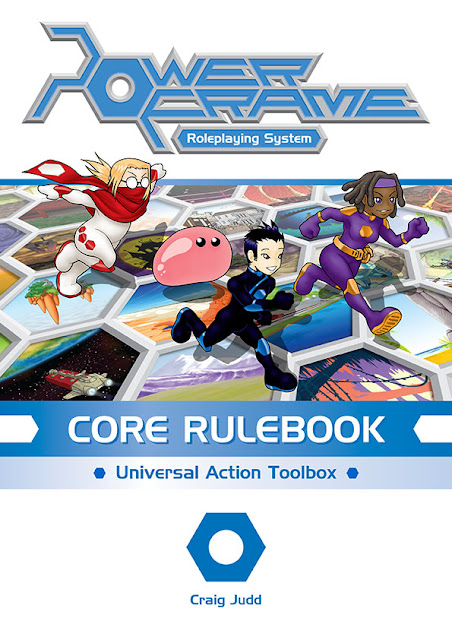 I started writing the very first draft of PowerFrame about nineteen years ago, I think. This isn't one of those "X years in the making" stories, though; I realise that's not a selling point! PowerFrame's been an active, evolving, and most importantly played system for all that time. Even now, though, the very core of the system remains exactly the same as the day I first wrote it down. It's building outward from basic principles that makes it the flexible, modular, adaptable system that it is today.

I was at University at the time, and voraciously played many different RPGs. I'd previously written a fantasy board game called PowerQuest, based on an earlier campaign idea I'd had that involved questing around a fantasy kingdom seeking the lost pieces of a suit of power armour to fight against an ancient evil. I realised that the simple system I'd used for the board game could be easily adapted and expanded into an original roleplaying game, and initially the game was called the PowerQuest RPG. However, I soon realised that, since it already contained fantastic and technological elements, it wouldn't be hard to fill in the gaps with modern equipment and expand the game into a simple generic system. This was in the mid-90's, when Generic was the Wave of the Future!

I named the generic version of the system PowerFrame, to reflect its origins and express its powerful, flexible, and "fill-in-the-blanks" approach.

For the next ten years, I kept writing rules modules, hacking the game to emulate the style of whatever I was watching or playing at the time. I introduced the game to new groups as I moved, and some of the players started using it to run their own games too! I wrote up the rules in Word, but in those days traditional publication and distribution meant getting it out to a wider audience was a distant pipe-dream.

I bought a copy of Adobe CS so I could professionally lay out a publishable copy of the rules. The InDesign version has gone through three different layouts.

Initially I was planning on perhaps releasing the rules through print-on-demand, designed to be ring-punched and filed in a binder. I took that approach because the rules are modular and at the time large sections were in flux, so it seemed sensible to allow people to reorganise things and have a system where I could easily release single updated pages. However, that system proved a little ambitious, and there were practical issues, as well as some minor problems with the layout design.

I also experienced a crisis of confidence. As I was approaching completion on this version, I poked my head up and did a little research into the state of the RPG hobby. So much had changed in the ten years or so I'd been exclusively playing PowerFrame! I discovered the Forge (which had come and gone), and RPG.net, and all sorts of new games. I went on a year-long pilgrimage to try out new systems, and used this new knowledge to look at PowerFrame in a completely new light.

In an about-face, I briefly tried to create a completely electronic layout! This would be published exclusively in PDF, but presented much like a website – no page numbers, just topics on pages, and with hyperlinks for quick navigation. While ambitious, early feedback told me that people still wanted the option to print the rules. I compromised, so while the current layout is still intended primarily for use on tablets and computers, it includes page numbers as well as chunky hyperlinks.

The final version of the rules took exactly three years from creating the new InDesign file to its release on DriveThruRPG. Writing and formatting took two years during my spare time. While a lot of it was lifted from earlier drafts, I went through the whole text to clean it up, revise, and polish things.

I also completely overhauled some subsystems; magic, in particular, got gutted and refitted. The old magic system relied on lists of pre-written spells, but expansion and variations on a theme meant the magic system was 75 pages on its own. Breaking the spells down into their component pieces allowed me to cut the page count to about a third, while technically increasing the available spell variations.

After completing the main body of the text, it took another entire year to finish off enough art to comfortably fill out the book!

Now that the Core Rulebook is out, I can finally turn my attention to other projects. I have some board and card games in the works, and at least one idea for a new RPG I want to work on: Thunder Hunters! Primitive hunters living alongside dinosaurs in a world that never was!

I also have a few freelance jobs on my plate at the moment, but unless I find permanent employment I'm always on the lookout for more! If you're after editing, illustration, layout, or graphic design, send me an email at powerframe(DOT)rpg(AT)gmail(DOT)com to discuss your project.

I might also write some supplements for PowerFrame if I find the time, or if there's demand. Massed combat, cybernetics, a Mystic Companion, bestiary, setting seeds or entire setting books... I don't want to just run on the supplement treadmill unless people actually want this stuff, though – so if you think something's missing from the Core Rules, let me know!

Labels: PowerFrame
Email ThisBlogThis!Share to TwitterShare to FacebookShare to Pinterest

I've finally completed PowerFrame's last illustration and submitted the files to DriveThruRPG for review, so the Core Rulebook should be available for sale shortly! Stay tuned for the release announcement, or join the Community on G+! 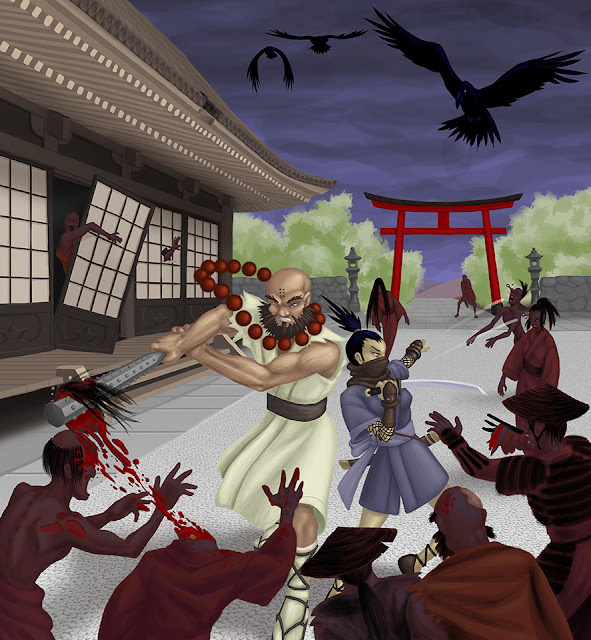 In a recent discussion, I was surprised when someone mentioned that it was a "unique selling-point" that PowerFrame was designed to support multi-genre mashups. I guess the traditional appeal of generic systems is in allowing a single system to emulate different genres by tailoring the rules to suit each unique world, but in my mind their true strength lies in the cross-genre possibilities.

After all, when you have a single game system that has rules for swords, firearms, and beam weapons; plate-and-mail, flak jackets, and powered armour; cybernetics, spaceships, and magic; the obvious thing to me is to start mixing and matching! In PowerFrame, at least, everything's written and rated against the same set of basic rules. All of the example weapons, armour, and creatures are put together from basic principles, and so you can break them down, modify them, or build your own original stuff using the same guidelines. This fluidity is key to combining the trappings of different genres and having them all work smoothly together.

The first-ever PowerFrame game was a techno-fantasy world. Other campaigns have included post-apocalyptic wild west, gothic sci-fi, and urban fantasy. My current campaign is a post-apocalypse techno-gothic monster mash; after civilisation was destroyed by a Cthulhoid apocalypse, Earth's native monsters rose up and fought back the cosmic horrors. Now, vampires, werewolves and worse dominate the human population while keeping the Mythos aliens at bay in a shattered world.

Of course, you can always use PowerFrame to play a "straight" genre game. It's been used for straight-up fantasy, Warring States ninja, Age of Sail pirates (albeit with magical rocks), Cthulhu investigation, and it can also support straight modern or sci-fi games.

The game does come with its own approach and assumptions (for example, firearms are a bit weak to encourage engaging gunfights rather than paranoid sniping), but it's designed to be flexible and adaptable, so you can often tweak it to your needs with only a few minor changes.

Anyway, it should be out in the next few days, so you'll finally be able to see for yourself!