Only one more picture to go for PowerFrame! It's going to be a fairly large and involved piece, though, and I still have a little bit of proof-reading and last-minute edits to do, but I'm still looking good for a June release! In the meantime, if you haven't seen it yet, please check out the free Rules Primer!

This second-last picture is for the Ability Description section, illustrating the Tech Ability. 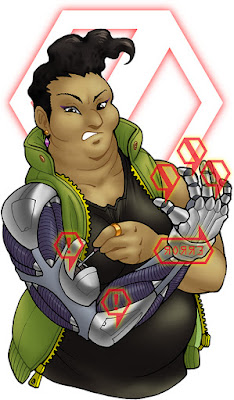 The Nuts & Bolts chapter goes into nitty-gritty detail of all the Abilities, Attributes, and Traits in the game. The Ability Descriptions include cross-references to the main places in the rules where the Ability is used, and also describe any unique special functions or properties.

Tech allows characters to build and repair high-tech items such as computers, lasers, cyberware, antigrav systems, starship drives, and the like. The exact functionality will depend a bit on the technological norms of the setting. Repair allows you to restore lost Structure and functions to damaged Tech-based items.

In addition, Tech is one of several Abilities that allows for Specialisations. Rather than having to buy separate Abilities for Electronics, Computers, Cybernetics, and Robotics, each of these fields is a Tech Specialisation. Every positive level of Tech allows you to pick one area of Specialisation.

Ironically, there aren't currently rules for cyberware in the core book. It gets a little complex dealing with body replacements when characters have a single Health pool and start replacing parts of their body with Structure. I have some ideas for handling it, so if there's demand I'll probably release a short supplementary PDF for cybertech.


The final illustration is going to be a big battle scene, but I haven't yet decided on the genre or layout.

Only two more illustrations to go for PowerFrame! There was a bit of a lull in art production last week because I was working on a free introduction to the full rules. Check it out! If you like what you see, please consider joining the Google+ Community. Now I'm back to working on the last few pieces, starting with some equipment. 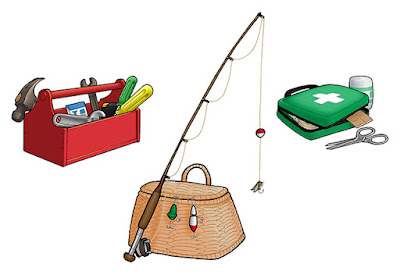 There's not a lot to say about equipment, really! I've never been a big fan of tracking huge amounts of gear in games, so I try to cut it down to the basics and essentials where I can. To keep the Encumbrance system actually usable, I tend to give expendable gear such as rations or ammunition no Encumbrance value – so you don't need to recalculate every time you use something.

While you can just stick to the basics, I have included a fairly comprehensive Equipment section for groups that prefer to outfit their characters thoroughly. Most of it focusses on camping and survival, food, light sources, and other outdoorsy stuff.

The pictures above are from the Specialist Gear section which includes tools required to apply certain technical and practical skills, medical kits to assist with first aid, and some basic computers. Most general equipment doesn't have a particular in-game effect (other than facilitating appropriate actions), so it's not too hard to figure out in-game Encumbrance and Cost if you can estimate its real-world size and cost.


I already have the next illustration planned and thumbnail-sketched – someone fixing their own cyber-arm, for the Tech Ability Description section of the rules.

I only have three illustrations to go for PowerFrame! I also now have a completed cover image, which I'll reveal sometime soon. For now, though, here's the fourth-last image – an arcane researcher, which will illustrate the section on Creating Arcana.

A while back, I overhauled PowerFrame's Mysticism system to cut down on the page-count. Going with a "build spells from the components" approach allows for greater flexibility, and does away with the need for an exhaustive spell list that's full of minor variations of similar spells.

Parameters define the limits in which a spell operates – things like range, duration, and area of effect.

Major Arcana form the body of a spell. They are stripped-back effects; if Parameters define the when and where, Major Arcana supply the how. They may describe how to make a damage roll or apply a status effect, or where to move a target, or what information is revealed, or many other effects.

Although the list is fairly comprehensive, you can create your own Major Arcana by describing the desired effect and rating its difficulty using the guidelines provided.

Minor Arcana are specific details such as a particular type of target, or a scale of hex, or an ability or attribute. Minor Arcana have no effect on their own, but some Major Arcana require a Minor Arcana to specify what the spell affects. Minor Arcana supply the what or the who.

For example, the RESTORE Major Arcana restores lost points to a pool stat such as Health, Endurance, Mana, or Fortune. It has the same effect on each pool, but you need to use a Minor Arcana to specify which one the spell is targeting.

Some Minor Arcana are lists of game terms (hex scales, abilities, attributes), but others are more descriptive. The subject Minor Arcana category includes various types of characters and creatures, and could easily be added to or revised to suit a particular game world. Likewise, the matter Minor Arcana could be rewritten to reflect a particular world's elemental philosophy.


Although it's a bit of a challenge to get a handle on all the Arcana and figure out how to build spells the way you want, once you do it's a very satisfying system. To help out, I'm designing new Caster and Spell record sheets. I've found that once you have a spell written out, it becomes very easy to modify it on the fly without having to recalculate the whole thing.

If there's demand for it, I may release a supplement featuring new Arcana, and possibly even a collection of pre-made spells for those who don't want the hassle of building their own.

Four illustrations left to do! This picture is for PowerFrame's Critical Hits chapter, and illustrates the "Push & Stun-Only" Critical Hit Table. This post, I'll summarise how Critical Hits work. 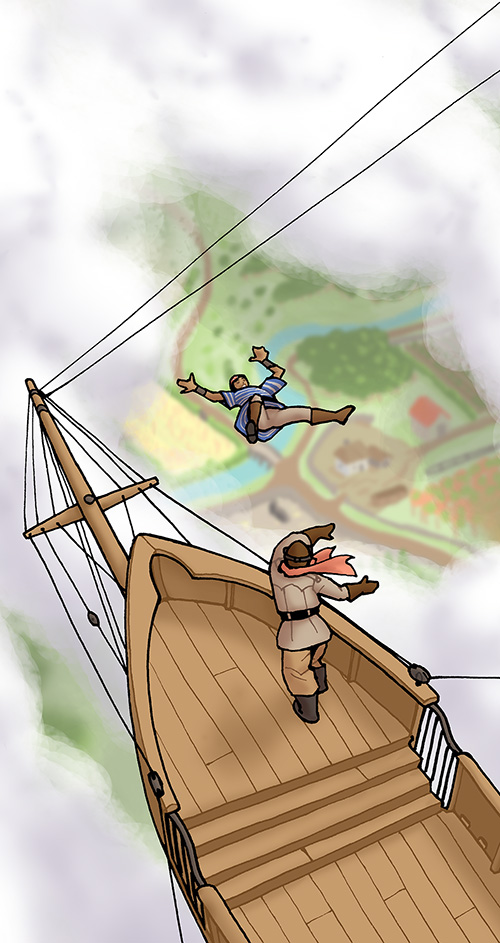 In PowerFrame, a Critical Hit is any Attack that beats the opponent's defence by 5 or more. Every additional 5 points increases the severity.

The basic rules allow you to deal with Criticals simply by increasing the Damage by 2 for every 5 points of Attack Margin, but there's also an optional detailed Critical Hit system that gives combat a more risky and gritty feel.

You roll for Damage as normal (generally an Ability plus the weapon's damage rating plus a roll, against the defender's Toughness, Armour and roll). Even if you deal no actual damage, you still get to check for a Critical Hit result.

You roll a single die (not open-ended), add the Damage roll's Margin (which could be negative if you rolled below the defender), and add +1 for every additional 5 points the Attack hit by. This is your Critical Hit result. Look up the total on the appropriate Critical Hit table, depending on the damage type (Cutting, Piercing, Bludgeoning, Energy, Grapple, Push, Stun-only).

A result of 2 or less has no effect. Generally a result of 3 is ineffective as well, apart from Bludgeoning attacks or hits to the head. Results of 4 to 6 tend to be minor Stun or Bleed results. 7 to 9 become more serious, leading to broken bones and severe bleeding. A result of 10 or more is usually fatal, or at least debilitating – severed limbs, pulverised bones, paralysis, massive bleeding, and so on.

So although it's possible to inflict a Critical Hit result even if you don't deal any actual damage, it will most likely be pretty minor. Unless your Attack hit by 10 or 15 points, the best you can get with a Damage Margin of 0 is a 6. You generally need a Damage Margin of 4 or more, which is a fairly serious wound, to have a chance at taking out an enemy in one hit.

Critical Hits against player-characters do happen, but more often than not you can minimise the risk using Fortune to re-roll bad results. That said, I did once play a character who was hit with an Attack Margin of 20+ and a Damage Margin of only 1 who was very neatly decapitated (Damage 1 plus Attack Bonus +3 plus a 6 on the Critical die for a total of 10). Most of the time though, Critical Hits seem to affect enemies, and it can be pretty gratifying for a PC to devastate their foes in graphic style.