The latest illustration for PowerFrame is a bit late because I had a sudden and unexpected (but welcome!) run of freelance design work all come in at once! Now that's behind me, I'm hoping I can double-time the next picture and get back on track. After this piece, I'm down to the final five!

This illustration will grace the Conflict chapter, in the section on Stun damage.

There are four general types of Attack you can make in PowerFrame, depending on whether you aim to Wound, Subdue, Grapple, or Push.

While Health loss inflicts no particular penalties and results in long-term unconsciousness or death, Stunned targets suffer a penalty to most actions (apart from inflicting or receiving damage) – but it also wears off automatically at the rate of 1 point per turn. If a character accumulates 6 or more Stun they fall unconscious temporarily. Characters can't be killed from Stun alone, but every 5 Stun inflicted in a single blow also reduces Health by 1.

Normally you need a weapon that inflicts Stun damage in order to make an Attack to Subdue (boxing gloves, concussion grenade), but it's possible to inflict Stun with any weapon at reduced effectiveness (using the flat of the blade, pulling the blow to avoid permanent damage, or aiming for a weak-spot such as the stomach).

Stun can also be inflicted from means other than an Attack to Subdue, such as poison or a mystical effect.

On the subject of ninja, PowerFrame has built-in ambush rules accessible to anybody – but characters with high Stealth who use the environment to their advantage are more likely to pull off stealth attacks with greater success.

If a character is unaware of your presence, and your Stealth roll is 5 or more points higher than their Wits roll, they don't get to make an Avoid roll. You simply have to beat their base Avoid value with your attack, which also increases the chance of a Critical Hit (an Attack with a Margin of 5 or more).

If you beat their Wits roll by 10 or more, they don't get a Toughness roll either. You roll Damage against their base Toughness plus Armour value with no die roll added. This greatly increases the chance of taking someone out in a single hit or, if you managed to score a Critical Hit, of at least maiming or debilitating them.


I'm unsure what picture will be next; I'll just see where my artistic whims take me. The pieces I have left to do are: Tech (Cyberware), Critical Hits (Push), Professional Equipment, Creating Arcana, and a Battle Scene (genre uncertain).

Six illustrations to go for PowerFrame RPG! This week I drew a picture for the "Nuts & Bolts" chapter, which is a reference for the various elements that define characters. In this post, I'll introduce those elements.

Characters in PowerFrame are defined through three major categories: Abilities, Attributes, and Traits.

Abilities are the primary means by which characters, creatures, and even objects are described in game terms. Characters are differentiated by choosing which Abilities they are good or bad at.

Abilities can represent physical traits (Strength, Toughness, Looks), learned skills (Melee, Engineering, Driving), and knowledge (Languages, Appraising, Bureaucracy). There are also some Special Abilities which either work in unusual ways (Fortune, Magic) or have restrictions on which characters can use them (Berserk, Fly).

Abilities start at 0, which is the level of an average untrained adult human. That baseline varies depending on whether we're talking about Strength, Riding, Medical, or Magic. Abilities can go up to 5, and you can also take some at a negative to represent weak areas. Races often have special modifiers that raise or lower the starting and maximum allowed values.

Intelligent Races can improve their Abilities through learning and practice. The list of Abilities is quite long, but it combines everything that would be separate "stats" and "skills" in other systems. Once you're familiar with them, you can probably pick a dozen or so Abilities to build your character around and ignore the rest.

Unlike Abilities, Attributes are assigned rather than chosen. Most are either dictated by a character’s Race, or derived from one of their Abilities.

Attributes normally can’t be improved using Experience Points, although those based on an Ability will improve as the Ability increases.

Traits are special descriptors that represent unusual capabilities or weaknesses that can't be modelled with Abilities or Attributes. They are assigned to Races and creatures, and aren’t available to characters that don’t start with them.

Traits describe things that make a character or creature different from the standard human baseline. They include things like natural weapons and armour; the ability to fly, burrow, or use another type of movement more or less effectively than a human; breathing underwater or not needing to breathe at all; fast-healing regeneration; phobias, aversions or reactions to various things; innate powers that mimic spell-like effects; and many more. Traits are a catch-all category, and it's possible to invent new ones to represent powers that work in specific ways.

Traits are rated in Threat, to give some indication of their effectiveness. Drawbacks have negative Threat.

By putting together a set of Racial Ability Modifiers, Attributes, and Traits, you can quickly and easily define a new fantastic race or creature. If the existing Traits don't have what you need, you just need to define how something works and assign a Treat rating to it and you can plug it into the existing system.

Create your own original races for your own original worlds. It's possible to stat up and play the Oni-Faced Naga pictured above (Natural Armour, Natural Weapons, Comfort Zone: Warm, Dark Vision, some Racial Modifiers; possibly some additional weaknesses or powers). Heck, I once created and played a five metre tall pearlescent chipmunk-thing, the spawn of a holy sky-squid, with fleshy "dreadlocks" that dropped off and turned into small versions of itself. It made sense at the time...

I'm not sure what I'll be drawing next, but my list of possibilities is getting shorter!

This week's Polearm illustration isn't very exciting, but it was fairly quick to create. It's going in the weapon lists, on the Spears & Polearms page. 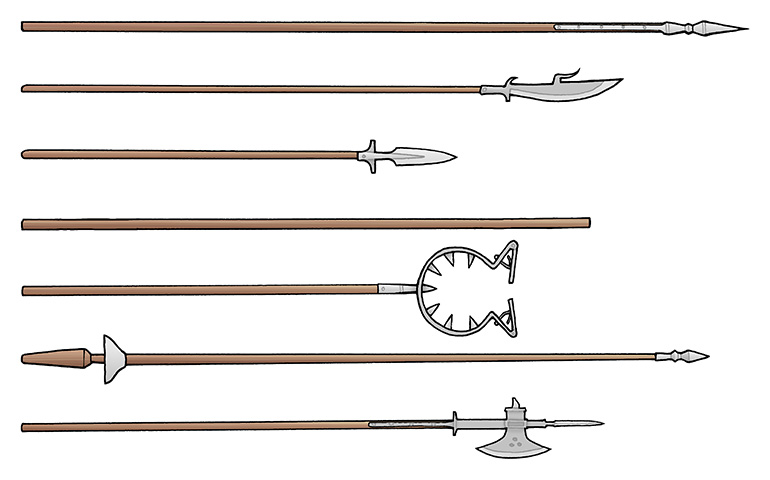 Yes, PowerFrame is one of those RPGs with pages of weapon lists, although I haven't gone all-out with glaive-guisarmes and voulges and such! This post, I'm going to talk a bit about how the game provides interesting choices by differentiating weapon types, and how it supports you in making your own creations.

The baseline melee weapon in PowerFrame is the sword. It uses your Melee Ability to attack, and your Strength Ability to do damage. Bigger swords cost and weigh more, and have bigger damage bonuses.

Different weapon types such as axes, bludgeons, chains and flails, daggers, and even some sword varieties, change up not just the Attack Ability but also the Damage Ability.
This also applies to ranged weapons, although things like guns and lasers (and chainsaws) do damage based on a set number, not an Ability calculation.

Varying the Abilities creates a couple of interesting effects. Firstly, it serves to make the weapons feel distinctively different. Secondly, it means characters with diverse Ability choices can find a weapon that suits their style (or conversely, allows you to create a character tailored towards a particular fighting style).

Given the other functions of Abilities such as Strength (Carry, Pushing, Grappling), Toughness (Damage Resistance, Endurance), Avoid (Dodging), Melee (Throwing, Catching), or Unarmed (Grappling), choosing a particular weapon style has other implications for a character's playstyle.

While the different polearms use a variety of Attack and Damage Abilities (mostly defaulting to Melee and Strength), their main distinguishing features are the Reach and Hold-Off Attributes.

Normally close-combat weapons can attack a target in an adjacent 2m Hex. Weapons with the Reach Attribute can make a close-combat attack against a target a number of Hexes away equal to the Reach rating. All the listed Polearms have Reach 2, although particularly long pikes might have Reach 3 or 4.

When you're attacked by a weapon that has Hold-Off, it imposes a condition on your movement. For example, if attacked by a Pike you need to make a Move roll against the wielder's Melee in order to move closer to them. There is some variation; Boar Spears prevent any movement closer to the wielder, but only if you are wounded by the attack. Man-Catchers prevent all movement if you are caught by its grapple.

Not all Polearms have Hold-Off. The Lance provides a damage bonus if you use it in a mounted charge.

Designing Your Own Weapons

As with many of its subsystems, weapons are created using an effects-based system. All Weapon Special Attributes are listed and rated in Threat (used to calculate Experience awards from combat), so it's just a matter of coming up with a literal description of what the weapon is capable of and then going through and selecting the appropriate options.

Case in point – we're just setting up to start a new campaign in a post-apocalyptic techno-gothic setting (think Vampire Hunter D). One of the guys is playing a werewolf, and he jokingly suggested he have "lightsaber claws". To his surprise I said I could stat them up no problem, but I was interested to know how he imagined them working. I think he's either gone with fingertip implants, or some sort of knuckleduster projectors.

Actually creating them was a simple matter of adjusting the Beam Sabre I already had on the weapon list.

It's lining up to be a pretty nuts campaign, and I'm glad to be able to demonstrate the system's flexibility and diversity. The first session is tomorrow!

The next picture on my to-do list is a character who displays several nonhuman Traits, such as armour, weapons, and wings.