After first crossing the mountains into Alhast, Kieara helped three farmers fight off a goblin attack on the road. Both of the men fell unconscious, but the goblins were slain or chased off. Kieara also tasted goblin blood, gaining their ability to see in the dark. She befriended Miriam, the only conscious farmer, and escorted her to the village of Torndrey. There they sought medical assistance from Granny Blake, an old witch who lived on the outskirts of town. The old witch seemed to recognise what Kieara was. 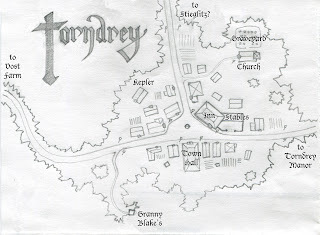 The next day Kieara was planning to leave, but she decided to help a woman whose woodcutter husband had been attacked by a wild beast. It became apparent that the couple's young son had tragically become a werewolf during an unexplained absence some weeks ago, and that he had attacked his own father as he returned from the woods one evening. She sought out Granny Blake again for medicine, and learned of a series of werewolf attacks that plagued the village twenty years ago. With Granny's assistance, Kieara used her unique talents to cure the woodcutter by drawing out the Were-blood while resisting the urge to drain his human blood. However, she was unable to bring herself to slay the boy and end the curse once and for all.

While Kieara dealt with the werewolf problem, she also witnessed the black carriage of Baroness Hartford returning to the town from parts unknown, sweeping through the marketplace full of townsfolk who knelt before its passage. The Baroness drove straight to Torndrey Manor, a short distance out of town. The Mayor pressured Kieara to leave town, and she pretended to do so while actually stalking the woods nearby in search of the werewolf who had infected the child.

She came across the dishevelled beast feasting on the corpse of a deer, and saw that it wore an iron collar and the cuffs of manacles on its wrists. She tracked it back to the Baroness' Manor, where it disappeared into the cellar via an open window. As she watched from the woods, she also witnessed the Baroness' carriage returning from a recent visit to the town. The Baroness and her footmen escorted three townsfolk inside - including Miriam!

Once they'd gone inside, Kieara mounted a rescue attempt. She discovered that the horses pulling the carriage were animated corpses. So were the footmen, concealed under wigs, powder, and fine livery. She fought her way past the zombies and rescued two of the captives, but Miriam had already been taken to the dining room - a hall of carved onyx, with foot-thick double doors the only way in or out. Miriam was tied to the table, with the Baroness - a Ghoul - about to dine. In a hard-fought struggle, Kieara managed to defeat the Baroness and decapitate her, bringing an end to her reign of terror. The Baroness' pet werewolf swore fealty to Kieara, but she was unwilling to have such a creature in her employ and bade him remain at the mansion while she returned the captives to town in the Baroness' coach.


It was half-way through the rather drawn-out battle with the Baroness and her zombies that we discovered +Annette couldn't see all of the electronic character sheet I'd made for her on Google Drive. Half of her weapon stats were unknown to her, which explained why the fight was taking so long! We quickly rectified the situation, and the Baroness was summarily dispatched.


Reunited with her now fully-recovered kin, Miriam left town in the early morning to return to the farm. After the sun had risen, Kieara discovered that the undead horses had crumbled to ash now their master was dead. She returned to the Manor, looting it of valuables and information, including the Baroness' signet ring, a sheaf of letters she found in the guest quarters sometimes occupied by the Count, and a book on the dark arts of necromancy.

As her final act in Torndrey, she decapitated the servile werewolf and walked north out of town.