I'm still trying to get a couple of my Blade Bind playtesters together to go over the latest duelling draft, try out the character/drama-web setup, and maybe even attempt a quick game to see if anything falls off.

In the meantime, I've been working on some art assets. Behold, the first three completed Blade designs! 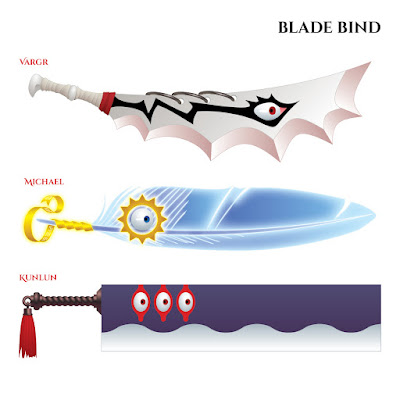 I sketched them out in pencil first, then scanned them and created vector art in Illustrator. That should give me a good amount of flexibility to rescale or repurpose the images.


Incidentally, I'm an experienced vector artist. I worked for fourteen years at an embroidery firm, turning people's bad logo scans into high-quality vector art. I've been doing freelance logos, icons, character sheets, and images in addition to layout and editing. If you have a need for quality handcrafted vectors, please get in contact! You can email craig (DOT) t (DOT) judd at the gmails.

Pretty much all of the swords in Blade Bind are massive two-handed "buster sword" type things – it's a not-so-subtle metaphor for the melodrama and angst! I'm taking some inspiration from Soul Calibur and the manga Shadow Star (the monsters in which had creepy eyeballs that looked like they were made of shiny ceramics).

I've also been spending some time setting up a draft layout for the book in InDesign. Since I haven't finished designing the game yet, let alone writing the mechanics, that should give you some idea how keen I am! 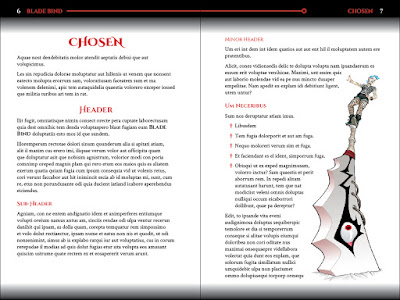 It still needs a little work – I intend to experiment with graphical flourishes or effects in the top and bottom graded strips, either adding some more red traceries or turning them into roiling tendrils of black fog. I might also see if I can incorporate some Blade silhouettes, blowing gusts of sparks, or blood-splatters, but I don't want to end up obscuring the text or putting graphics behind it because it reduces legibility. I can always add some of those embellishments to the chapter title pages.

I have some other Blade images in the works that I'll post next time. Until then, I... should probably catch up on freelance work! Hopefully we'll get a chance to do that playtest in the next week or so, and I'll be able to start refining the manuscript.

Following on from my previous Blade Bind post, I've spent the last week-and-a-bit testing and refining the duelling rules, as well as figuring out how to structure a drama web. It's all looking very promising, and hopefully with a bit of effort I can put together an alpha-draft in the next few weeks.

I'll save the drama side of things for later, because today I want to talk about the evolution of the card-based duelling system.

Each combatant has a hand of cards, sometimes playing blind against their opponent and sometimes reacting to a face-up card on the table. It's this use of hidden information that makes it difficult to test the system properly on my own – there's only so well a "blind-draw" player can do. Thankfully, I've managed to recruit a couple of keen playtesters and run a few experimental duels online.

I complained to (at the time potential) playtester Nat that I was having problems finding a way to play with a deck of cards online, and he pointed me to Roll20. I'd had an account for about two years, but never actually used it. Now I may have gone a bit overboard – not only have I designed a custom card back, but I've also set up a soundtrack and made some custom character portrait icons!


The original duelling system was pretty simple: after playing a card face-down to Engage and decide who seizes the advantage (otherwise known as Initiative), the attacker plays a card and the defender plays one or more in response.


Also, whenever you have the initiative you have the option to Disengage, which clears the current exchange and lets both players draw two cards.

That system was quick and pretty fun. Playing to a single hit always keeps you on the edge of your seat. A bad hand could spell the end for you, but I was looking for a quick resolution anyway. However, it was also lacking in some areas. There wasn't much depth or strategy to it, and it also tended to break a little when the combatants started with different-sized hands. It basically came down to forcing the other person to run out of cards before you did, so you could land an unopposed hit. Effectively, your cards act somewhat like Hit Points, and the only way to change the relative values of two hands was to force your opponent to dodge using multiple cards. Unfortunately, it's very difficult to claw your way back once your opponent has a card advantage.

Dodging was a bit of a double-penalty, because you had to spend two cards (or more) and deal with another attack... when you probably only had rubbish cards left anyway. We experimented with "you only need to play a single low card to Dodge" and "Initiative switches automatically after each move", but neither was particularly satisfying.


I'd been looking for ways to incorporate suits into the system as well, and during a three-hour test, Playtester Todd suggested "the defender gains Initiative if they Dodge with two cards of the same suit." This sparked off a chain of ideas in my brain, and I revised the defence options. Now I've included a variety of ways for the defender or the attacker to lose cards.

I'm particularly proud of the new Counter, which is a Parry that uses the same suit as the attack. The attack gets reversed, with the Parry card forming a new attack, and the old attack card becoming the basis of the old attacker's defence. There are a couple of options for defending, but it basically forces the old attacker to play an extra card. It's also possible to Counter a Counter, which is really cool, not least because it mimics actual swordplay around counterattacks.

I revised Bind; rather than just playing a new Engage, you play face-down attack cards. The low card gets to play extra cards to defend themselves, and play continues as normal.

There's now a few different options for if you can't equal or beat the attack with a single defence card. I won't go into them all here, but they include situations where the attacker keeps the initiative; the defender gains initiative; or the exchange ends. I'm also mulling over some options for the Jokers; now that suits have a bigger effect, I'm thinking maybe they let you declare the suit of the next card you play.


I am hoping there aren't too many options now! The game feels a lot more in-depth and there are more meaningful choices to make and tactics to take advantage of, but that can mean spending more time making decisions. Still, it's starting to feel polished, and even if I end up dropping some of the defence options to streamline things I think it's well on its way to being a playable system.

We need to run a few more duel tests, and I hope to try out the tentative Melee rules for fights between more than two combatants soon. I'll try to make a post sometime soon about the drama-system setup I have in the works, but no promises if something else exciting comes along!