Way back in 2015 I posted about the way Size would be handled in the PowerFrame Core Rulebook. While the numbers work, I've never been totally satisfied with the "floating modifier" solution. I had tried several ideas, and the one I settled on had the least amount of weird stuff being juggled on the character sheet. An earlier version had you track "weapon level" and "total level" for five or six specific Abilities, which was a bit of a pain, and difficult to explain.


While the current implementation of Size does work, it tends to be fiddly because you have to constantly consider Size Differential and remember to apply it in the right situations.

Unfortunately it’s not possible in the current system to just incorporate Size into the affected Abilities directly, because of the way weapons use different Abilities — you end up with large characters being super-accurate with axes, and tiny characters doing huge damage with flails.

Recently I reapproached the idea of recording extra values on the character sheet.

Rather than incorporating Size directly into Abilities, or having it act as a floating Modifier that needs to be applied when relevant, we instead create derived Attributes that can be written on the character sheet and used consistently.

Each character has these regardless of Size, although for Size 0 characters they will be the same as the basic Ability.


Durability = Toughness (or other Ability) + Size

The Derived Attributes replace the listed basic Abilities for the noted functions. The basic Ability Levels are used for basic Attack and Damage values, and to determine minimum and maximum values.

For example, a Size 2 character can buy Wits like any other Ability, and puts 3 points into it. They then have a modified value on hand for rolling to Notice things (3-2=1), while keeping the basic value for rolling Initiative (3). We can also use the basic value to work out the correct values for Attack (3-2=1) or Damage (3+2=5) rolls that use Wits, or to calculate Durability (3+2=5) against flashblindness.


I also created a revised character sheet — here's a preview, but I'll likely upload a PDF version to the product on DriveThruRPG once I get some feedback. The extra stats ate up a bit of the Equipment list, but I was also able to remove the footnote from under the Weapon list. 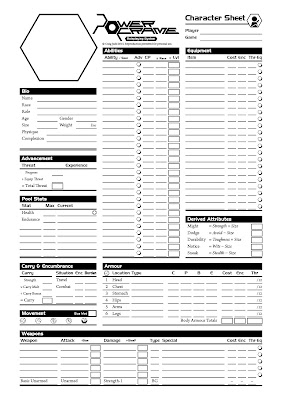 The reason I've been thinking about Size lately, is because I've been designing the power armour for Ark Frontier. The colony has a few dozen suits, across three different models. All the exo-suits are under the control of The Line, charged with maintaining colony defence.

I think that using pre-totalled Derived Attributes will make it a little easier and more intuitive to handle power armour. Also, many of the Phantoms in Ark Frontier will be smaller or much larger than people, and it would be nice to be able to supply the final total stats in the creature write-ups.

If you've read or played PowerFrame, especially if you've had to deal with Size, I'd love to hear your thoughts! I don't think there's many better ways of handling it without stripping back the whole system and starting again from scratch.

Blade Bind is part of the current Anime Blast Bundle of Holding, which runs until June 26th. This is a great opportunity if you haven't picked up a copy yet, and a percentage of the profits even go to Reading Is Fundamental! 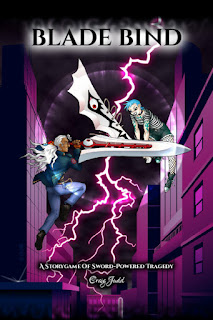 Even if you already own Blade Bind, this Bundle is a treasure trove of anime-inspired roleplaying. For just $8.95, you can round out your collection with:

And if you contribute above the Threshold (currently at $19.25 as I type), you also get all of the following:

Since launch, a bonus game has also been added to the line-up:
Keep an eye out for future news and developments!