PowerFrame uses a set of four Game Helper characters, who act as the subjects of rules examples. They are kind of "iconic" characters, although given it's a universal game they tend to dress up as lots of different characters.

Here is the first group I came up with:

In the interests of diversity, I included one male, one female, and one androgyne. I included one Caucasian, one Asian, and one dark-skinned person. I mixed up gender assumptions a little by having the male with long hair and the female with short hair. All of the Game Helpers also have names that could be either male or female. The fourth Game Helper, Soggy, is a shapechanging blob that takes on the roles of monsters and adversaries in the examples.

These have been the Game Helpers for a few years now, but I recently looked at them critically and noticed I was playing into certain stereotypes and cultural assumptions.

Realising that some of these elements were as problematic as the issues the group was meant to address, I went back to the drawing board and designed a new group.


Are there still issues? Certainly there are some, but with only three characters there's limited conceptual space to be much more inclusive. Sandy could be seen as a 'sexless fat nerd' stereotype, or as a being inclusive of people with different body-types. The only disability represented is Sandy's glasses, which is a pretty minor thing.

I hope that this second group is a better example of diversity and representation than the first. If you have any suggestions as to how I might improve the situation, I'd love to hear some feedback!

I'm slowly putting together the artwork for PowerFrame, starting with the essentials. Each chapter has a full-width illustration at the top. This is one I've just finished for the Travel chapter, so I thought I'd discuss Travel in PowerFrame a bit.

PowerFrame's Travel rules are detailed and comprehensive, based around a World Map made up of 20km wide hexes. Here's a sample page, which discusses how to use the World Map in play. 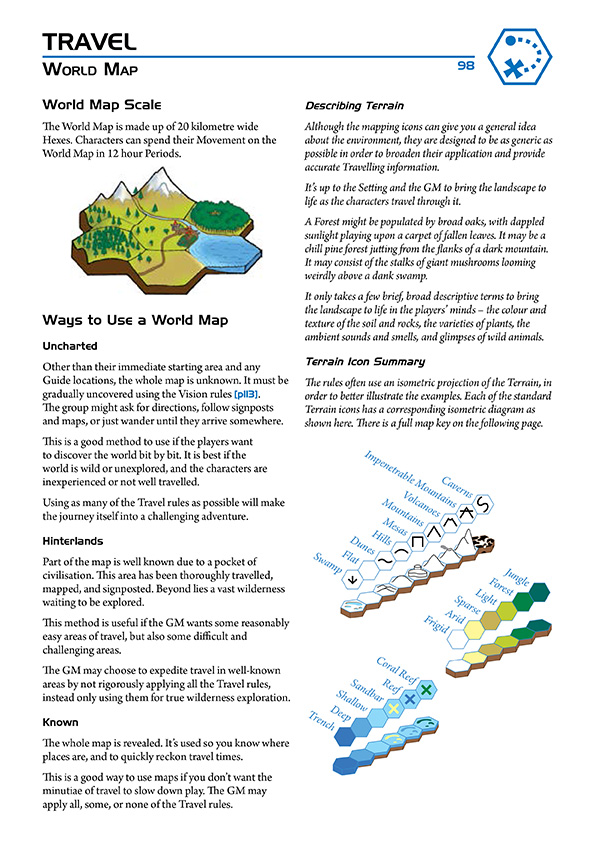 Land hexes are made up of both Topography and Vegetation, which can be combined to represent almost any environment - from Arid Flat to Jungle Mountains. Some weirder combinations create specific terrain; Arid Swamp represents a salt marsh, and Frigid Swamp becomes tundra. Personally I am quite fond of Forest Mesas.

In addition to the basic Terrain and Water icons, there are other markers for settlements, fortifications, sites, ruins, caves, mines, cliffs, beaches, roads, streams, rivers, cataracts, waterfalls, and oases.

Once you have a map together, the rest of the Travel rules respond to the variable terrain as the party travels over it. While you can skip stuff that's not important to your game, you can use the full rules to play a procedural hexcrawl and explore a fantastic landscape. There are rules covering Weather, Encounters, Getting Lost, Movement, Vision, and Exposure.


This flexible and adaptable system is designed to help you create and explore your own worlds, whatever they might look like.