+Michael's started a game of Pathfinder using the Beginner's Box, so I'm a player in this one!

Not having played Pathfinder before, I'd gathered that it was an offshoot of D&D 3.5, and a lot of people on the forums I frequent find it to be overly fiddly, mechanically speaking. I played a few sessions of 3.5 a while back, and after much exposure to AD&D 2nd Edition in the 90's I actually really liked a lot of the changes they made - especially reversing AC/THAC0. However, I can totally see where it could become "too much" with all the manoeuvres, feats, and modifiers to keep track of.
I'm starting to feel a bit "over" dungeon fantasy as a gaming genre, but was willing to give it a go. In my AD&D days, the simplicity of the Fighter had always appealed to me, so I started thinking about a two-handed sword warrior.

I must say, the Beginner's Box really does an excellent job of guiding you through character creation and presenting your options clearly without being overwhelming. The layout and icons used throughout the book really help in this regard.

So I was going through the Hero's Handbook, looking at options for my planned greatsword-wielding Amazon - and then I opened the Player's Pack expansion and fell in love with the Barbarian class. I've always disliked D&D's tendency to make everyone move at the same speed, so the extra Movement really appealed. I also liked the idea of a warrior tapping into their primal rage to cause carnage and destruction. It really fit with the image I was developing for my character. Thus was born Durga the Thunderbolt. 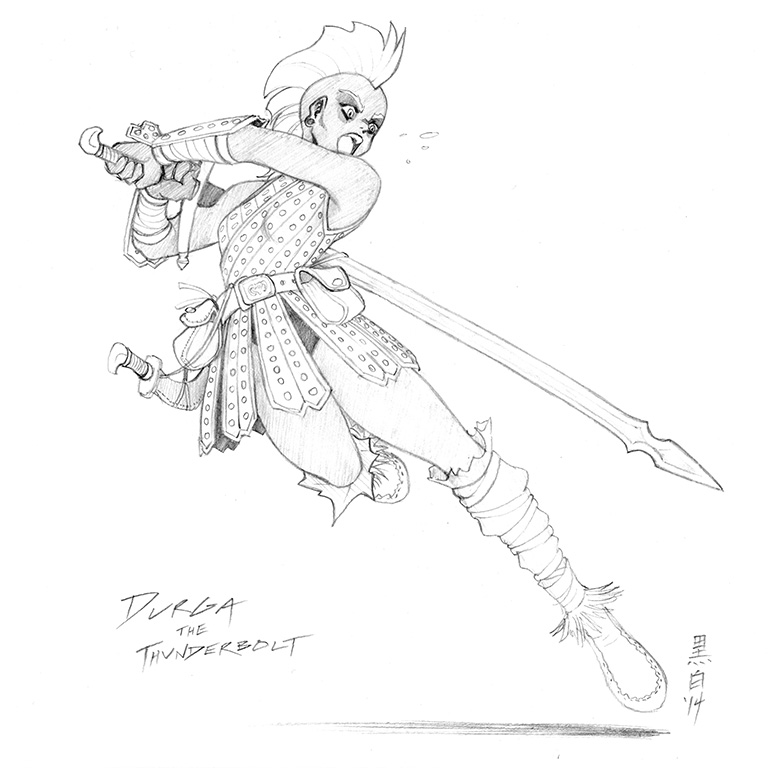 We're using the free version of Hero Lab to keep track of characters for this game. It certainly helps make the modifiers and fiddly parts of the rules more manageable.

With a bit of a recruitment push, we ended up with five players plus GM.

The party began at the mouth of some caves, rumoured to be the lair of a beast known only as Black Fang. It had been attacking livestock near the coastal town of Sandpoint, so the group had accepted a request to seek out and destroy the menace. All of the characters save myself were locals; I had wandered in from the wilderness and taken this opportunity to prove my bravery and seek treasures.

We were attacked by goblins at the cave mouth, who proved no match for us. We entered and came upon a group of goblins arguing with their leader. We negotiated with them and managed to gain information about Black Fang's weaknesses, but refused to accept the leader's quest to return a toy dragon to him. Negotiations broke down and we slew them all in battle.

We avoided Black Fang's lair for the moment, choosing to explore the other chambers first. I swam across a deep pool to an island  where treasure lay, and was attacked by a Reefclaw. The treasure included a Dragonbane Longsword, which I claimed for the battle ahead, as it seemed Black Fang may be some form of draconic creature.

We discovered a goblin and a giant spider dead near each other; the goblin held the toy black dragon that the goblin leader had wanted us to retrieve.

The final room housed a glowing red ruby flanked by statues. After much caution, we approached and the statues announced "Approach with humility and live; approach with pride and die!" After much cautious debate, I crawled towards the altar. A fan of flame shot from each statue over my head, but there was enough room to claim the gem - which stopped the flames.

We withdrew to the entrance chamber to camp and prepare for battle against Black Fang.

Michael did a good job of GMing his first session ever, adapting well to our decisions and presenting the dungeon in a neutral manner - he wasn't out to get us, nor was he there to help us.

My only disappointment was that our characters all started the game without knowing each other, save a brief introduction on the road to the caves. I would have liked to establish connections to some of the other characters, giving me some extra motivation besides the mercenary promise of treasure. I thought it a little odd, anyway, given the characters were all supposed to be from a town of 1200 residents, that nobody knew anybody else at all.

However, the lack of connections didn't impact the actual play of dungeon delving, and we began to develop the beginnings of relationships naturally as the game progressed. I was able to express my primal nature and take on my role in the party as highly mobile heavy hitter, a front-line fighter with my eye ever on the next doorway while the others searched and looted.

All up I enjoyed the game, and I'm looking forward to Session 2! I am, however, also eager for this group - many of whom are novices - to experience some of the other flavours of RPGs. In particular, I'd love to run a game that wasn't focussed on maps and minis like our Savage Worlds, D&D Next, and Pathfinder games have been. I'm keen to try something like Apocalypse World, Ryuutama, or Tenra Bansho Zero with them, and Annette's also expressed a desire to run a Firefly game using the shiny new Cortex Plus edition - which would also meet my mini-less criteria and let me play as well!