On Sunday night we held the inaugural game session organised by members of the Devonport RPG group. I'm GMing Savage Worlds, and we started off with a D&D-style fantasy game focussed on adventure and combat. We spent the week before the session creating characters via the Facebook group. As it was to be a test game, pitched as a one-shot, I wasn't too worried about making a perfectly balanced group, so within the confines of typical D&D-style fantasy and the options available in the Savage Worlds core rules, I let people pretty much take what they wanted.

I drew up a simple map of a rural coastal province. I got everyone to each choose one of the options from a list of six to connect their characters to the location and give them some motivation for protecting the place. Other than that, I suggested that they were all local do-gooders and heroic types, rather than mercenary adventurers only out for themselves.


Since there was no unifying point of contact for all the characters, and because Annette and James hadn't played a D&D-inspired game before, we decided to actually start everyone off in a tavern... 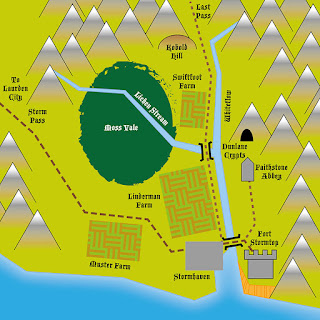 The Green Dragon Inn is the social heart of Stormhaven. One morning, all of the characters are assembled there when Old Linderman from the farm just outside of town bursts in, and tells everyone that he's witnessed kobolds come out of the Moss Vale forest and kill one of his cows! Kobolds don't usually come this far South, as they mostly occupy the ruined fort on Kobold Hill, near a mountain pass that has fallen into disuse.

On their way out of town, one of the priests from Faithstone Abbey sought out Snowfall and informed the knight that the gates to the ancient Dunlane Crypts had been opened. The priests feared some sort of evil or necromancy is afoot. The group decided to go check out the kobold situation first.

At the farm, they found the butchered carcase of the poor cow. They followed a trail of blood and footprints into the woods, and eventually found a group of six kobolds cooking cow meat in a clearing by the river. Forgoing all pretence of ambush, Kae stepped out and challenged the creatures; in a brief skirmish, all of the kobolds were quickly defeated. The last one, an archer who'd moved to the treeline, almost escaped but Invghost managed to aim an arrow between the treetrunks and shoot him down. The heroes feasted on barbecued cow and returned to the Green Dragon to report a job (and steak) well done.

The group next headed up the other side of the river to ask the priests about the Dunlane Crypts. They are an ancient burial ground, and the Abbey was established to safeguard it. The priests had sensed an evil presence, disturbed spirits, and possibly the taint of necromancy. The group immediately headed in, with Kae once more charging ahead. The interior was a dark passageway; only Kae had thought to bring a lantern, and Novim could see in the dark as he was an Elf. The rest suffered a bit from the poor lighting. The Elven ranger scouted ahead, discovering an animated skeleton wandering around in a side passage. It was quickly despatched, followed by three of its friends.

After picking the lock on a barred gate, the party entered a large chamber with six skeletal warriors. Invghost became cut off from the rest of the group and, due to his lack of close-combat skill, suffered a wound at the hands of two skeletons. The heroes soon finished off the undead, and discovered a hidden treasure chest. They reported back to the Abbey, receiving a reward, and finally managed to pop the lock on the chest after arriving back in town to find many gold coins. Freshly cashed up, they bought some new equipment and retired for the night.

At the Swiftfoot farm, Kae witnessed a strange, flickering light on the distant Kobold Hill. In the morning, he brought the news to town. They also heard the testimony of a pilgrim who'd arrived in Stormhaven that morning after travelling through the Last Pass. He'd seen a greenish-black flickering glow playing across the ruins, and decided it was best to press on rather than camp nearby. The group immediately got ready and headed to Kobold Hill.

The ancient, ruined fort was once the scene of a mighty battle in years long past, and now its great walls were laid low. They found signs of a necromantic ritual, with a magical symbol burned into the earth. However, there was no sign of any activity above-ground, so they descended into the ruined cellars through one of the blasted towers. They discovered a large, dark chamber with eight skeletons. Luckily, more people had brought lanterns with them, so visibility was less of an issue. As they engaged the skeletons, a necromancer appeared from behind an altar and began chanting. Unfortunately for him, Novim's bow took him out in one shot! He obviously should have kept his head down. The group cleared out the rest of the skeletons and returned home, secure in the knowledge that evil had been defeated for another day.


Everybody enjoyed the game, and we're planning a second session in a couple of weeks. There will be a few tweaks and revisions on some of the characters, now everyone's had a chance to see how the system works in play.


I deliberately went pretty easy with the monster stats and numbers, as I didn't want to accidentally overwhelm the PCs during their first introduction to the system. It's obvious that I'll need to step up the quantity and/or quantity of enemies in order to provide a decent challenge, though.

Although I set up a dynamic situation with multiple things going on, I never actually followed through on any evil plots as a consequence of player choice or inaction. They chose to deal with the kobolds first rather than the crypts, so I could have had undead attack the Abbey. They didn't check out Kobold Hill promptly to see why the kobolds had moved South, so I could have had a wave of freshly-risen skeletons attack the Swiftfoot Farm.

I originally planned the game as a one-shot, but I'll expand on the basic ideas and give them a reason to roam further afield, facing more varied and hazardous foes, and exploring new and more dangerous environments.