I finally have an opportunity to play a Smallville-style game using Cortex Plus Dramatic Roleplaying! +David Miessler-Kubanek is running a sci-fi game reminiscent of Babylon 5. After fighting a great War to a standstill, three powerful factions have come together on board a neutral space station to try and find their way to a shared future.

We spent a few weeks on collaborative world-building before starting character creation. There are many different aliens and factions, so I'll also put together an introductory post at some point...

Since I'm a player not a GM, I'm mostly blogging this from my character's point of view. However, due to the complex political nature of the game, and because it's run with "open secrets," I'm including a basic outline of the events in which I'm not directly involved. The outlines are indented, while my own character's narrative is written as usual. If any of the other players writes up their perspective, I'll include links.


The show opens with a shot of the Space Station from a distance, with the red sun blazing behind it. Some ships pass as the camera slowly zooms in alongside the station's bulk and follows its curve around to the loading dock.

One of Security Chief Marcus McGerrit's subordinates, Lt. Vosh, wants to open and inspect a suspicious crate that's arrived for the Valon "Ambassador," but the Chief overrules him. McGerrit examines the crate externally; he gets a strange cinnamon scent from it. The Ambassador is notified of its arrival.

Future Born to Pain in the Stars


Created and Directed by +David Miessler-Kubanek

Daniel Van Schultz talks with his aide, Jason Delores, about the evening's Valon Festival of Rebirth - the need to wear only natural fibers, the need to bring a gift of personal value and to give a speech about it. Van Schultz seems to intently consider what to bring.

Li-uax learns of the Valon shipment through the Reathis information network, and a heist is planned. 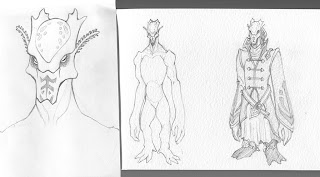 Here begins the personal log of Kaaradan'Bo'Maar. I am an Atmaa, one of the ruling caste of the B'Daani people. It is my privilged position to represent the Empire as Ambassador on this space station, where so many conflicting species have come together to discuss peace and the future.

During the War I was a General, a rank I still hold. It was my task to expand Imperial holdings and bring other civilisations under our sway, for the Atmaa are born to rule and it is our duty to guide the lesser species. I directed our forces mainly on the Union battlefront, where I began to realise that the creatures we were fighting may be different than those we had faced in the past. I have come to this Station, in part to find out more about these species so recently encountered, and in part to ensure the bounty of the Empire.

This day, I awoke refreshed and in good spirits. My valet Hashaa informed me of a Valon festival taking place this evening. As the Valon are vassals of the Empire, it is my duty to attend. I left the details and preparations in Hashaa's hands.

Hashaa is an Issh; both Issh and Atmaa belong to the B'Daani species, but it is the role of the Issh to serve. They appear somewhat physically leaner than the Atmaa, but are just as capable in their own areas of expertise.

As Hashaa departed my quarters to attend to preparations, I saw a Fo-an standing in the hallway glaring at me. As one of the Union species we fought during the War, the Fo hold no love for the B'Daani. Rather than being drawn into a confrontation, I simply shut the door.


McGerrit is visited by the Valon Ambassador, H'Ssan Gurahl, and two aides. McGerrit insists on escorting the cargo. Gurahl only agrees on the condition that he first inspect the crate in a private room. McGerrit and the aides remain outside, and McGerrit opts not to use surveillance to spy on Gurahl.

Having watched from the access tunnels, the Reathis set off an alarm, forcing the Ambassador to leave the room and return to his quarters. In his absence, Li-uax breaks into the crate, exposing himself and other Reathis to the alien spice within. Before they can make off with much of the contents, McGerrit determines that it was a false alarm and gets permission from the aides to open the door. Li-uax is forced to flee without covering his tracks.

When McGerrit opens the door a pungent odour hits him in the face. The two aides kneel, wafting it into their faces and praying. McGerrit sees that the container has been broken into, but is then overwhelmed by the substance and leaves to recover.

Lt. PacMahl of the Red Star Legion tells Captain Sanchez he's the only surviving witness of the slaughter on Aegis 7. He says then-General Kaaradan'Bo'Maar ordered the extermination of all the surrendered troops, along with a detachment of of CAW peacekeepers. PacMahl asks the Captain to arrest Kaaradan at once so justice can prevail, but Sanchez points out the Ambassador's diplomatic immunity. She also makes it clear that this station is designed for peace and that she will not tolerate threats to that mission, or to the Ambassador's person while aboard. PacMahl seems relieved to hear that the Ambassador is on the Station. Sanchez organises for one of her aides to take an official statement from PacMahl at some point so a proper investigation can be made.

After the foiled heist, Li-uax meets with the Anzi criminal leader Lisse Jeh Tsko to discuss the Valon drug and its intended use at the Festival. Tsko wants to find out more about the substance by testing it on someone, and Li-uax convinces Tsko that he is better-equipped to handle that task than the Reathis.

Van Schultz meets PacMahl in the Station's Temple after receiving a message about his son Roland. They speak uneasily about the past. PacMahl wants to pass on Roland's will, but Van Schultz doesn't seem interested and starts to leave. PacMahl calls out that hir relationship with Roland was a love across the stars. Van Schultz replies that he feels the same way about his dead son.


I have taken to walking about the station each day to make the Empire's presence felt, and also to show my willingness to engage in the forthcoming negotiations. Today as I was in the market area, I heard a guttural yell from behind me. I turned to see the Fo-an from earlier, now holding a dagger and moving towards me. I grabbed an implement from a nearby stall to knock the dagger aside. Hashaa leapt to my aid, suffering a cut while wrestling the Fo-an to the ground at my feet.

The Station's Captain arrived before her security forces did. To her credit she had the Fo-an taken into custody, although I had to berate her for allowing such an attack to occur in the first place. She offered to have her security forces escort Hashaa and I to Medbay. I agreed, on the proviso that she accompany us herself so as not to give the impression that my Issh was under suspicion or arrest.

On the way, I told the Captain that I intended to bring a small squad of Imperial troops onto the Station to act as my personal security detachment, as I'd obviously overestimated the spirit of peace and understanding that the Station was built on. She attempted to overrule my intentions, offering instead a Human security force. I expressed my reluctance to be attended by armed security officers from a species we had recently been at war with, and also noted that lax station security so far did nothing to boost my confidence. She once more publically overruled me, claiming that my request was unreasonable and suggesting that she had final say on the matter.

I rounded on this mere bureaucratic functionary, warning her not to question my authority or position. After I asked if she wanted to be responsible for the withdrawal of the B'Daani delegation, she stormed off.

Unfortunately Hashaa's condition had deteriorated during our argument, and we rushed him to Medbay for proper treatment.

Captain Sanchez goes to the Botanical Garden to cool off, and finds Van Schultz there. They talk things over, and the Captain feels a little better.

In the Station's slum, Li-uax and Tsko watch as their test subject - the B'Daani manservant, Hashaa - is subjected to the Valon drug. He is reacting badly, and Tsko is not sure if he'll survive or suffer brain damage. Li-uax calls a halt to the test before it goes too far, and rushes Hashaa through the access tunnels, returning him to Medbay just before Ambassador Kaaradan arrives.

Van Schultz meets with the arrested Fo in his cell to discuss options, which include making a second attempt on Ambassador Kaaradan's life during the Valon Festival. Before leaving, Van Schultz slips the prisoner a micro-cutter to aid in his escape.


A few hours later I returned to the Medbay to check on my Issh's progress. Once again my confidence in Station security was shaken, as I discovered Hashaa was in worse condition than when I left him! It was obvious that he'd been given some sort of detrimental drug while in Medbay's care. I immediately summoned the head of Medbay, Dr. Dierdre Sandaval, who had just come out of surgery. She confirmed that Hashaa had been exposed to an unknown chemical, but she would require some time to analyse it. She also advised he would have to rest for a couple of days, leaving me without my valet.

This was the final straw. I would not allow the safety of this diplomatic mission to be compromised by slipshod Station security. I immediately summoned a detachment of Issh troops from my  Destroyer to provide proper security. In accordance with the Station crew requests, and respecting the peaceful nature of this endeavour, I agreed that they would be armed only with nonlethal weapons - stun batons, and polymer guns which fire rounds designed to adhere to and immobilise the target.

I have returned to my quarters in preparation for the Festival. I have stationed two soldiers outside my suite. I consider the gift chosen by Hashaa with my approval for the Valon festival - a painting, showing the B'Daani and Valon fighting as a united force against the Union during the War. It is obvious that not everyone has put aside the past, and I must maintain vigilance for my own safety and the safety of this mission. I send off a report to my homeworld, Baddra, and request additional resources.

Van Schultz is getting ready for the Valon Festival, a box in hand. He asks his bodyguard to find out why PakMahl is alive and his son is not, then bar him from this station; and as for the Fo-an in the cell - ensure he almost succeeds, then kill him.

Captain Sanchez learns that the B'Daani have brought a contingent of troops aboard. She considers co-opting the new troops to help with security matters.